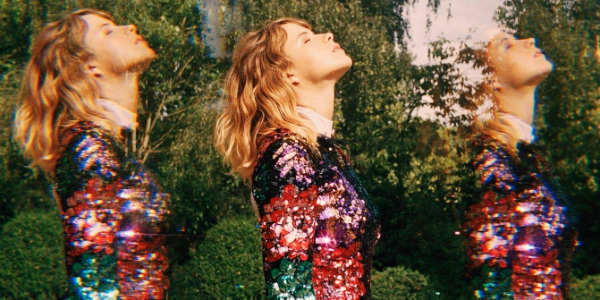 As I first mentioned in my post From Sweet Songstress to Poetic Pop-Star; The Musical Evolution of Gabrielle Aplin, with each release, Gabrielle Aplin provides us with a new feeling of musical growth. Avalon continues this tradition, with an almost transformational atmosphere of freedom.

Our first official introduction to Gabrielle’s new release was the song Waking Up Slow, a track that, out of the E.P.’s 4 spiritual melodies perhaps best encompasses Gabrielle’s new style and chapter of personal development.

Both the song and video present us with an airy, psychedelic vibe that is more than familiar to any listener that has ever found themselves stuck between consciousness and unconsciousness, sleep and activity. It carries with it a narrative that describes the tendency of the mind to be temperamental and unexpected. Gabrielle walks, along to the dreamy instrumental backing, as she is slowly taken around a surreal world, confused and thoughtful, she is discovering an epiphany that has taken a while to realise. The tunes nostalgic verses are slow, and, as always, poetic as we watch Gabrielle talking both to the muse of the song and to herself as she decides her next step.

“I could be your friend/ But I’m unprepared / Oh, I’ve never felt like this / I was unaware / You were lighting flares / Now I’m running scared.”

Ever-relatable, ever-melodic, Gabrielle performs a story many of us will no doubt connect to, with her own personal touch and originality. Fitting to its title and content, Waking Up Slow is one of the most other-worldly songs on the E.P. but the rest still carry on this flair of ethereal distance.

Say Nothing is the E.P.s next track and one that leaves us a little more heartbroken. With a distinct clarity to Gabrielle’s delivery of each line, there is a confidence in the decision being made within the lyrics, followed by the muffled sound edit within the chorus. The titular words “say nothing” are made to be unclear, made almost not to be heard. We follow the verses with a slowly strengthening statement against a repetition of interpersonal autonomy until the chorus arrives:

“say anything to make me stay/ but you say nothing”

There is our “I thought so” moment. The moment of sadness, deflation, but also of closure. The bridge is beautifully void of too much production, it is the bare minimum as it pleads to the muse “tell me, are you in there? Give me a sign”. Things have changed, the old memories do not exist anymore, and it is time for ties to be cut. Simplistic.

Used To Do returns, again, to the echoey, celestial quality of Waking Up Slow, but delivers it more subtly. It is also a slightly more cryptic song compared to the others, it lends itself to more interpretation. “Can you hear me?/ Tell me that you feel that, too / Do you still need me/ like you used to do?”. The lyrics could be seen as an expression of self-love, of returning to an old flame, of feeling nostalgic in one’s own town and hoping they are still at home. There are a lot of narratives to be pulled from the song, which is always a great quality to attach to at least one song on a record.

It feels like the instrumental side to it crosses a couple of styles and of chapters of Gabrielle’s own music. As if, for example, it was a combination of Avalon and English Rain meeting at a crossroads, suggesting that the track might be indeed about returning to something passed and hoping it is still present in the future.

Lastly, there is Stay. A song that has such a distinct Gabrielle Aplin signature to it, with what seems like a strong Joni Mitchell influence. The ballad of the 4 songs, it is an emotional separation from a previous relationship, and as such, a previous life.

“Life, a couple hundred miles away/ And I remember you like it was yesterday/ I didn’t want to leave you on your own in the end/ But we’re not supposed to feel like this, I can’t pretend.”

The content and lyrics appear to almost allude to a musical sequel to Say Nothing, a similar relationship that has lost its beauty and innocence. Say Nothing being the initial separation, and Stay being its later reflection, defence. As if the two situations met in a coffee shop and confronted the truth, through care and through bold and confident points.

It is a song that has an essence of still-present love but assurance that the right decision was made, for the mental health of both involved.

Avalon, all in all, is everything we would expect from a Gabrielle Aplin record and more. She continues to surprise us with a new take on her own music, a new stage in her progression. We are fortunate spectators, invited along the journey to share in the experience we all, at some point, recognise.

Emotional man with a habit of putting it into words. Poet, Writer and Performer from England. Trying to provide a safe space for mental health sufferers and victims of childhood trauma. I blog, post poetry on Instagram and have just released a self-published poetry collection. Come join the journey! View all posts by Liam Xavier

Let me know what you think! Cancel reply