There is a beautiful quote from the formidable and undeniably troubled Jack Kerouac which goes “Maybe that’s what life is… a wink of the eye and winking stars”. It really resonates with me and is something that makes me think of a particular moment whenever I find myself travelling to new locations, unfamiliar to me. A moment I found, once again, while away in Brighton for the past 3 days, celebrating my 23rd birthday.

For a couple of reasons, my recent happiness had been gradually in danger of slipping back to its hibernation, allowing it’s evil twin Depression to come sneaking back out, like a fox in the night. I was tired, fed up and a little pessimistic, but I understood that my birthday was approaching, and I would soon be leaving the rainy, miserable essence of wintery-spring in Essex for the hopefully sunny Brighton. Sure enough, once I had celebrated my actual birthday in the usual way of drowning myself in Rosé wine with friends at Wetherspoons, my friends and I set out a couple days later to drive to the famously open-minded town. 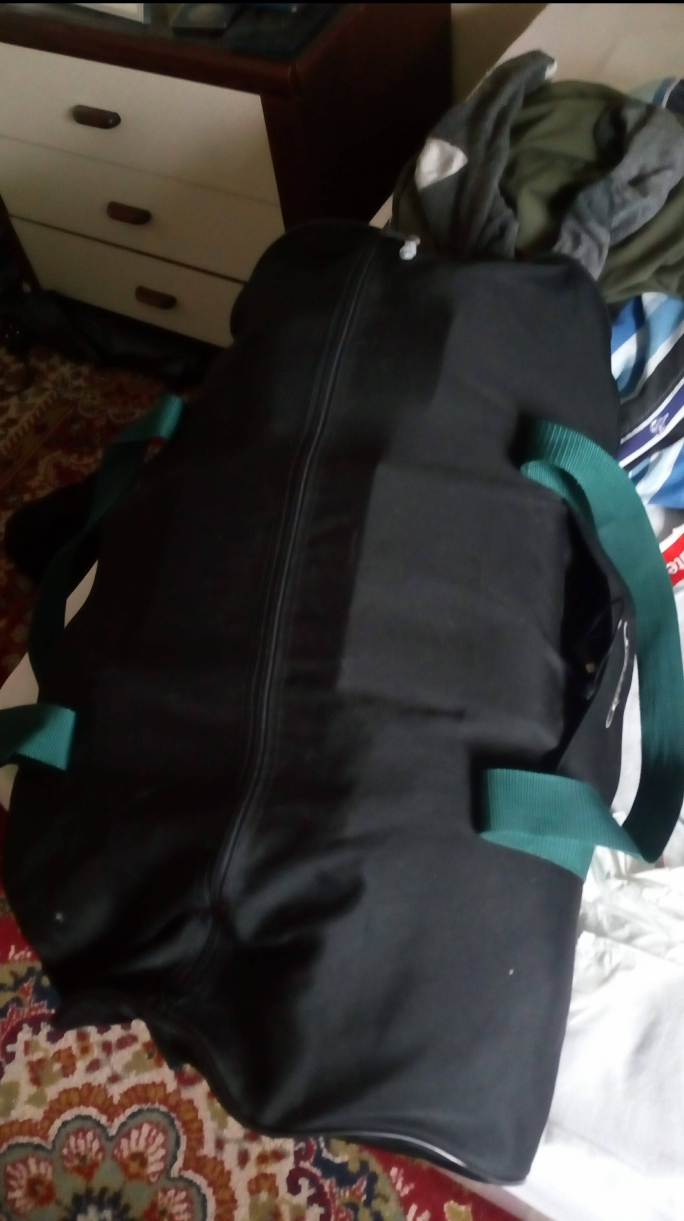 Perhaps for just two nights and three days, my holdall was somewhat oversized and overpacked but I enjoy my comforts, such as the option to decide what to wear once I’m there, and my books, so that is at least the justification I give myself. The drive was sunny to start with but slowly morphed into a loomingly dark and cloudy one, all the while soundtracked by the ever nostalgic, summery feeling Heart FM. So while the clouds were spitting their distaste on our joyfulness, we were belting out 2009 Ne-Yo, perfectly indifferent to the state of the weather. I’ve always found, aside from the trips themselves, the travel is always half the fun, there’s something about being in a car, with friends, driving down a long stretch of road, leaving the familiarity of home behind and heading to a new destination which makes the journey even greater. I could get to a new town and hate it, but if the drive was filled with happiness, then I would still count it as a great and worthwhile experience. 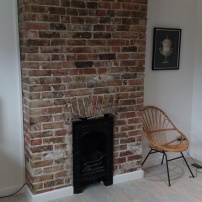 One side of the livingroom. 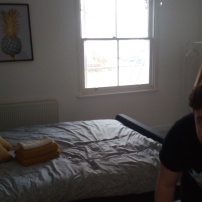 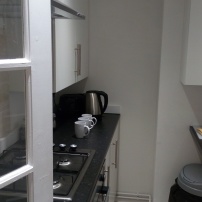 One side of the kitchen

The first day was mainly getting to know the apartment (Which we rented from AirBnB – I’ll leave a link at the bottom) and deciding what we wanted to do, going around the room and accumulating an average, totally helpless, answer of “I don’t mind, really.” The classic British answer to an always doomed question. The relaxed nature we all felt however meant that there was no pressure, we spoke about places we wanted to visit, things we wanted to do and then when the feeling arose we went out and did pretty much all of them. I have to be honest, as I am writing this, with tired eyes and a clearer mind, I’m amazed at how much you can actually achieve in such a small amount of time. 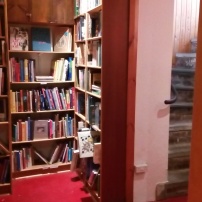 One of the first places we visited was The Lanes. We started with the North Lane, being the furthest from the flat. It represented pretty much every preconceived idea I had of Brighton: alternative, quaint, unique, full of character. The shops ‘Berts Homestore’ and ‘Brighton Books’ I enjoyed in particular, both had this old-fashioned feel to them but with a modern sensibility. I walked into Brighton Books, and felt the nerdy rush I get every time I walk into an independent bookstore, that feeling that you’ve stumbled onto something different, not a huge library of well-known books, but a carefully selected collection of older, and slightly less known treasures.

And then naturally we got hungry and found ourselves in a very alternative and interesting bar/restaurant called Dead Wax. With a skull sitting inside the ring of a Vinyl adorned at the top of its door as its logo and sign, we already knew it was an interesting place. Then you walk in and to the right is a normal bar, but your left is a collection of these old, classic vinyls in their sleeves, and the people in the bar are all stylishly dressed and, much like the building, filled to the brim with defined character. Normally our group, having one vegan, a vegetarian and the rest meat-eaters might be an issue, but in Brighton  – a town that seems culturally years in front of most places in England – it was no issue at all. I had a delicious pizza, and a Disaronno and Pepsi which later turned into an entire bottle of Rosé, many more Disaronno and Pepsi’s, and some cocktails (bought in Twisted Lemon – another bar bursting with passion and personality). 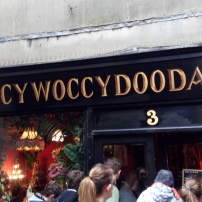 Alex, on our way to the Pier

It was a great first day for our trip but a heavier night than expecting and so it goes without saying the next day was significantly lazier, with the unwelcome arrival of a muggy head and dizziness. It also meant, as with many hangovers, we were driven closer, once again, to food. The day, it cannot be argued, was pretty much just a day of overeating, which is both a wonderful concept and a dangerous one. Especially when it starts with a trip to Choccywoccydoodah, a chocolatier and café that really sounds more like I’ve forgotten the name and gone “yeah that place, the whatsitcalled, the choccywoccydoodah”. Bizzare name or not, we were in heaven. There were endless displays of chocolate which brought to mind every delicacy from the fantasies of Willy Wonka. And walking up the stairs to discover a café with possibly the thickest slices of cake I’ve ever seen, was even more of a delight and also a point of contention for my body, which at this point was probably screaming for help. I ate my chocolate orange brick of cake, and sipped at my banana and chocolate ice cream shake, completely and utterly stuffed by the end of it. We finished our food, walked around, looking in yet more intriguing shops and once again ate more and more. For some reason, our stomachs were giving us a free pass, no doubt waiting to surprise us with a pot belly in a few weeks.

One of many large seagulls. 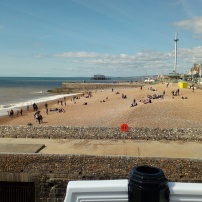 Put aside the overeating, the deliciously unhealthy overeating I might add, and the night of drinking, and we came to a much calmer night. We had dinner at Zizzi’s, found our way to Walkabout, bought a couple cocktails and then watched the night away with multiple games of pool – the ultimate friendship tester. We then, perhaps already showing our age, got home, not in the slightest bit drunk and played beer pong, but instead of beer it was water, and instead of ping pong balls it was grapes. We were basically finding excuses to drink water and eat grapes, we were intentionally being healthy, perhaps in a bid to dispel our sins of excessive cake and chocolate. But then the night passed, and it was already our last day. The 2 nights had gone as fast as you can imagine, and the sky decided to reward us with a clear, blue tint, and the appearance of the sun. We visited the pier again, sat on the beach and ate ice cream, every idea of the seaside you can think of. It was here when that moment I spoke of earlier came back again. That Jack Kerouac “wink of an eye and winking stars” moment.

A moment where the sea breeze afforded me a serenity; my friends, a comfort; and the memory of the past days, a sense of fulfilment. I thought of my looming descent into Depression previous to the trip, and my newly regained happiness topped off with a cherry of optimism. I remembered that these are the things that matter, these are the moments we stay alive and we work for, and we breathe for. These are the moments we can stare at the blue sky, and feel a wink, like through some sort of conversation, a handshake between the world and us, we return to things that are important, and we wink and are winked at, having shared the secret to life everyone should already know.

Emotional man with a habit of putting it into words. Poet, Writer and Performer from England. Trying to provide a safe space for mental health sufferers and victims of childhood trauma. I blog, post poetry on Instagram and have just released a self-published poetry collection. Come join the journey! View all posts by Liam Xavier

Let me know what you think! Cancel reply